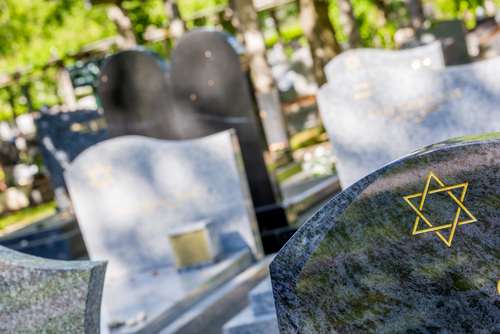 The Jewish faith is rich with history, tradition and specific customs. Every religion has their own, singular viewpoints on the topics of death, grieving and memorializing those who pass away. And, Judaism is no exception. As an ancient, prominent world religion, Judaism’s end-of-life and mourning practices have been passed on through countless generations. From placing stones to Shiva, millions recognize these practices all over the world. At Fox Monuments, we’ve been serving Long Island’s Jewish community for decades. Therefore, we’ve been providing monuments which honor the lives of Jewish people while paying equal tribute to their lifelong faith. Without a doubt, one of the most noble Jewish traditions in the aftermath of one’s passing is Tzedakah, or “righteous giving.” In this post, we’ll explore Tzedakah, what it entails and how the Jewish people apply this tradition to make something good out of something painful.

Jewish tradition views charity as the greatest force in the universe, stronger than death itself. Therefore, the act of giving selflessly is a means of almost counteracting someone’s death. Contributing time, money or goods to anyone in need keeps them alive, in a sense. By contributing to charities or organizations they cared deeply for in life, they’re making their memory a tangible force in the world. In fact, many Jews view Tzedakah as a way to become the voice of the deceased on earth.

Of course, countless Jewish mourners make monetary donations to causes and organizations that reflect the values and beliefs of whoever they lost. Obvi­ously, someone who was a volunteer or contributor to the United Jewish Appeal or the American Cancer Society, would be honored with donations to these causes. On the other hand, others may choose to honor a passionate, lifelong reader by supporting the synagogue library, the local public library or literacy programs. Ultimately, mourners select their donations by reflecting on the morals and ideals of those they lost.

Obviously, when it comes to giving, Tzedakah doesn’t limit mourners to monetary donations only. In fact, many choose to honor whoever they lost by donating their time and effort to support charitable causes or community service programs. However, Tzedakah can also include much smaller gestures of kindness. To honor someone you lost, you can volunteer for a few days or work in a soup kitchen. But also, you can do something as simple as cooking a meal for an elderly neighbor or walking their dog. Any gesture of kindness counts when it comes to Tzedakah. Ultimately, the most important thing is to give selflessly to honor whoever you lost. This is a means of preserving their memory on earth through a noble and caring act.

Of course, no charitable gesture is ever wasted. Tzedakah gives Jewish mourners an opportunity to create something special, kind and meaningful out of something tragic. In addition, it encourages us to honor our loved ones by doing something beneficial for those in need. At Fox Monuments, we’ll continue to serve Long Island’s Jewish community by crafting gorgeous, enduring custom headstones that honor the Jewish faith. We’ll also continue to help uphold any and all Jewish traditions concerning funerals and mourning, from the Unveiling Ceremony to Tzedakah and more.